For many (around 20) years the public services in the Euregio Meuse-Rhine (EMR), each of which are responsible for disaster and crisis management (including infectious disease control), firefighting and emergency medical assistance (including hospitals), have been working together within EMRIC. The partners in EMRIC are responsible for the implementation and enforcement of the European, bi- and trinational and regional agreements in the abovementioned thematic areas within the EMR. The partnership is supported by the EMRIC office.

Within EMRIC many matters are regulated in cooperation agreements and arrangements insofar as they fall within the regional competences of the partners. The services responsible for emergency care and the services for infectious disease control meet regularly under the “flag” of EMRIC. During the Covid crisis, however, these regional structures were overruled by national/ federal structures, these national/federal structures oftentimes took administrative-political and medical measures that were by no means compatible with each other. The obvious euregional cooperation was suddenly no longer self-evident, while the need for such a cooperation remained.

This, therefore, required a different approach within EMRIC and called for new agreements at the euregional level. For this purpose, the PANDEMRIC project was started. The project aims to lay down in writing, the agreements concerning the exchange of information on the administrative and operational level. Furthermore, the project aims to achieve better coordination between the countries in the EMR when it comes to the distribution of ICU patients. Another hurdle which presented itself during the first Covid wave, was cross-border testing. During the first Covid wave, it became apparent that this was virtually impossible to do. The purchase of personal protective equipment also experienced some setbacks. 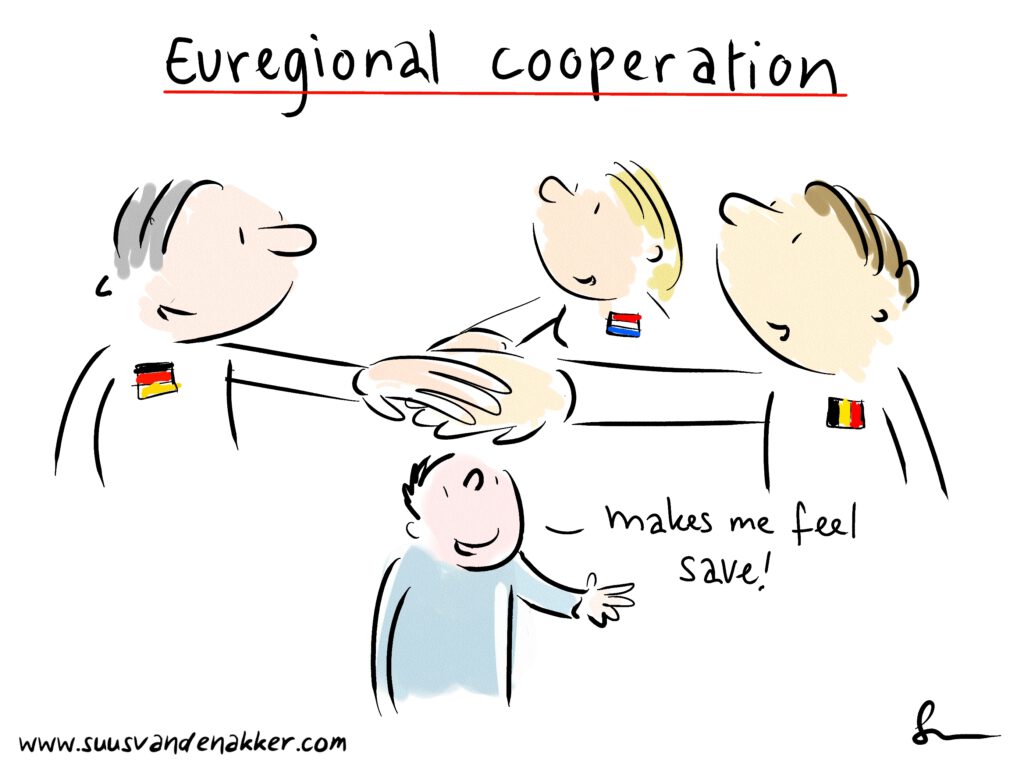 Therefore, this project aims to make use of the advantages of the border location during such major crises and facilitate cross-border cooperation in such situations. For the purpose of the project, research will be carried out into the effects of the measures and their impact on the EMR and (the health of) its citizens. The possibilities of broadening the cooperation between the ICU departments of the hospitals will be investigated as well. A study within this project will also examine the legal aspects of cross-border transport. The Twente region and the Zuid-Limburg region (GGD) in collaboration with the ministries of public health in the Netherlands and NRW have been working together for some time on the possibilities of reaching a uniform agreement in the field of cross-border ambulance care. It is precisely during the Covid crisis that the number of transports, especially for ICU patients, has increased. The Twente region will therefore also make use of the results of this research.

There is a need for a euregional early warning system and, for this purpose, some of the existing tools for information exchange will be adapted and improved. The request for mutual assistance (ambulances and Medical Intensive Care Units) will be more automated in order to reduce the pressure on the understaffed dispatch centres, infectious disease control departments and crisis teams in the event of such major crises as the Covid crisis. A euregional centre will be set up for the joint procurement of reliable protection equipment and euregional testing capabilities. This call will also take into account the additional costs already incurred and the costs still to be incurred to cope with the crisis in the EMR.

EMRIC (lead partner), ITEM, the MUMC, the German-speaking Community, the Province of Liège and the EGTC-EMR will work together on these improvements. In particular, the tools and the euregional ICU network also directly benefit the Limburg-North Safety Region (adjacent to the Kreis Heinsberg and Limburg (B). The Province Limburg (BE), the safety region South-Limburg, the Stadt Aachen, the GGD South-Limburg, the Kreis Heinsberg, the Civil protection of the federal state of Belgium, Province Liège and the safety region Limburg-North will be represented as affiliated partners in the project.

The management of the products will be the responsibility of the EMRIC partnership, which guarantees the continuity of developed products even after the project has been completed. Synergies with other projects, which will be submitted within this call, and in particular the Euprevent project, have already been considered beforehand. There is a clear division of tasks between EuPrevent and EMRIC. As the names say, EuPrevent looks at the preventive side of diseases among the population. EMRIC’s tasks include crisis management (including the outbreak of infectious diseases) and implementing the laws of the three countries, as well as international cooperation.

An Advisory Board consisting of senior scientists and administrators will supervise the project.

PANDEMRIC is financially supported by INTERREG Euregio Meuse-Rhine and is co-financed by the Province Limburg.